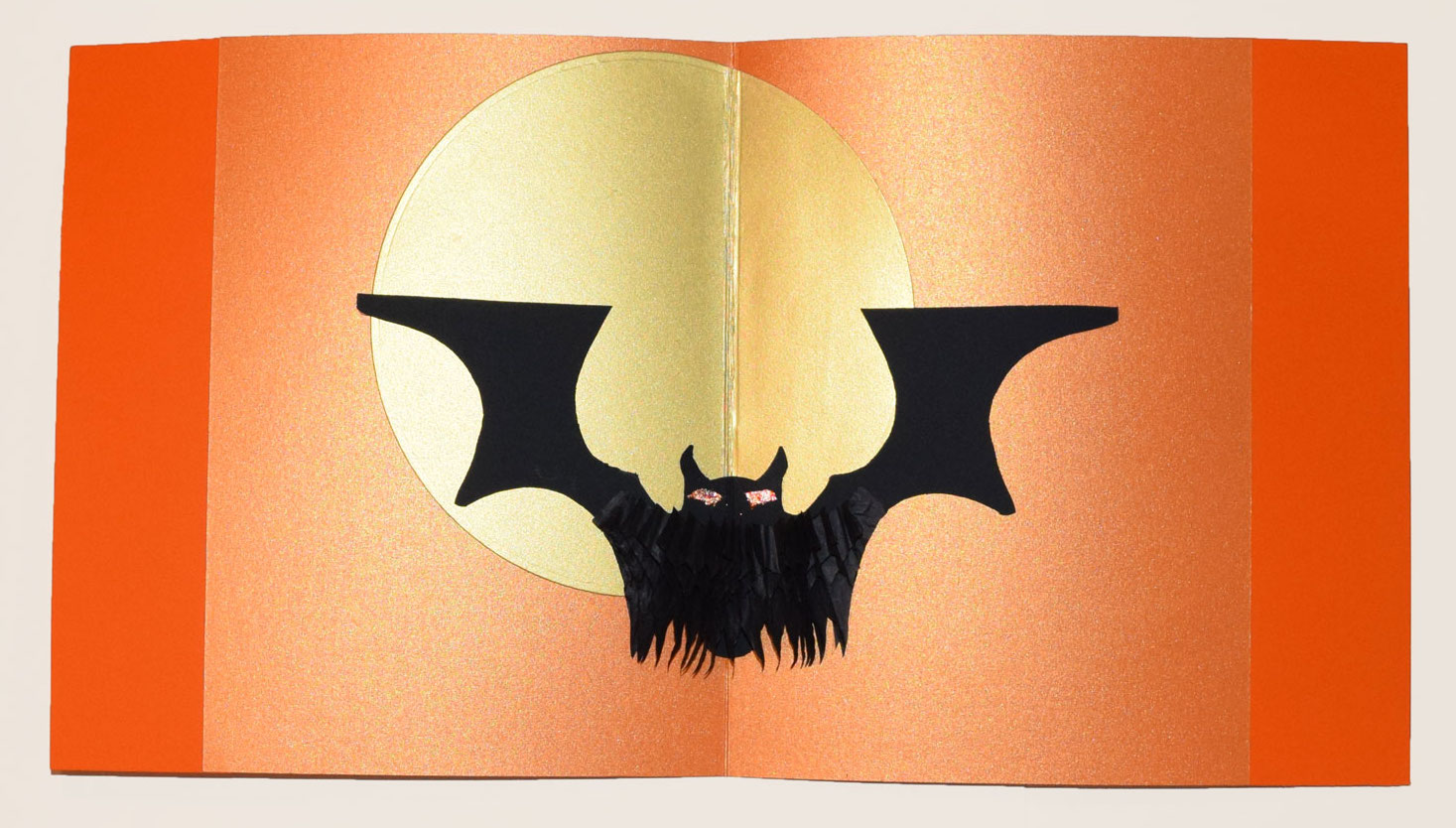 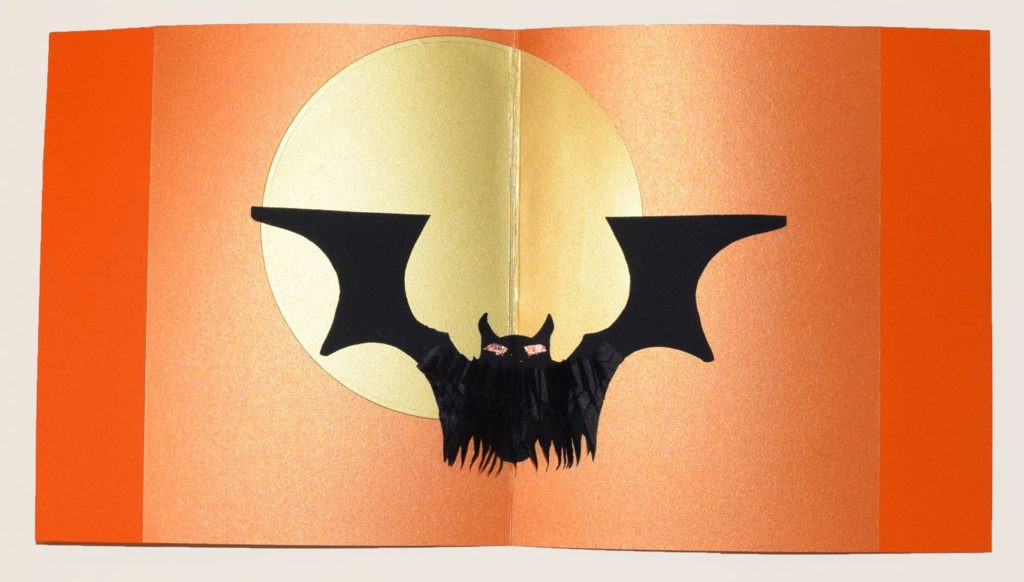 Creatures of the night fly free, by the light of moon.  Go big, with a bat that fills the skies, and arches gracefully over the moon, with little glimmery eyes; this is a bat to love. Since it has HoneyPOP on its center, it takes up a little space when closed and we will turn an envelope into a very thin box. I would hand off the card or mail it in a padded envelope; it is a gift to delight.

The Envelope: The envelope is Black 8.5 in. Square Envelope, scored and folded 1/2″ down the sides and across the bottom. Do this on both sides and work the score line into a firm fold.  Open it like you would a grocery bag, turning up the corners on both sides.  The envelope is now 8″ long and 7.5″ wide. At the top, trim the wedges on the envelope flap were you scored it: it is 7.5″ wide. To firm up the sides, cut Curious Skin, Orange, 100 lb cover along the 11″ side to 1″, so you have 3 strips 1″ x 11″.  Score 2 strips at 1.5″ and 8″ down from there. Using (2) 1/4″ runs of ScorTape on the edges of the Orange strips, put the 1.5″ along the bottom and rest is tucked into the envelope at the top of the box. The bottom of the strip hold the little triangle piece up. You will see when you get there. I didn’t use 1″ in case it was too close of a call on the cut; your choice. Cut the 3rd Orange strip to fit along the bottom and finish off the envelope. Refer to the photo and see how the final envelope looks. 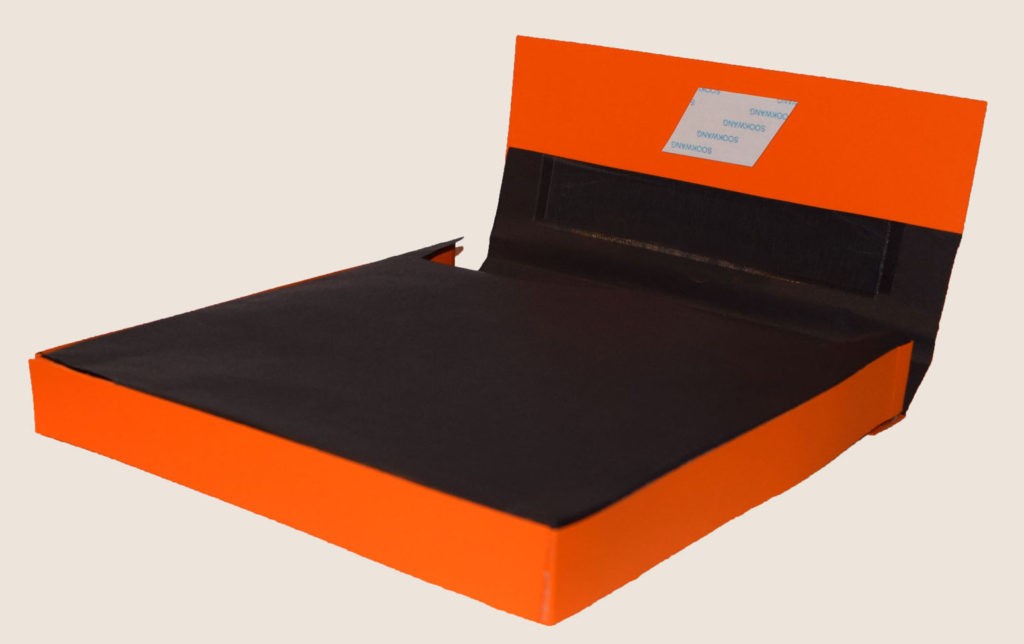 The Envelope Flap: Extend the envelope flap with some Curious Skin, Orange, 100 lb cover; refer to the photo. The Orange goes over the outside of the flap so the whole flap is orange on the outside and the original Black flap in on the inside. The Black flap is scored 1″ in from the original fold, since the envelope is now 1″ deep. Cut the Orange 5.5″ x 7.5″ and score it at 1″, then 1″ up from that: the first 1″ goes down the back of the envelope and the 2nd 1″ section goes over the envelope, the rest is the front flap. Attach it to the flap putting the tape on the (2) 1″ folds and the rest on the Black flap; don’t tape the creases. Undo the tape on the 1″ folds and press the Orange onto the Black, then pull off the rest of the tape and press the black down the Orange, trim is required. Add a 2″ section of 1″ ScorTape, tapered at the ends, to the bottom of the Orange flap, for closure; you can see it in the photo. 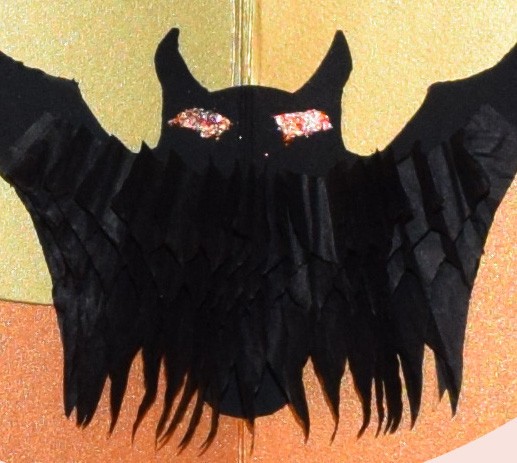 The Card: Do the inside first. Die cut Shine, Intense Gold, 107 lb cover into a big 5.75″ circle and place it off center with ScorTape, scoring and folding it before and after. Pull the tape on the small part of the circle and place it up to the fold of the Orange card.  Pull the tape on the other side and press the other half of the card down. I used some Un-Du to reposition mine, so it would fit more tightly into the crease. I creased the circle again, 1/16″ to the side, either side, so it would be more flexible.  To make the big and bold bat, print out the bat and cut a template, then trace it onto Curious Skin, Black, 100 lb cover.  Hand cut the bat, then score and fold it in half.  Tape and glue it on top of the Intense Gold circle, centering the bat 1.25″ from the bottom. I used blue masking tape to help hold the card flat, since the paper is heavy cardstock. For the eyes, put a small 1/4″ of 1/8″ tape that is angled at both sides, giving it a nice squinty look. Pull the tape and cover it with Gilding Flakes, Autumn Blaze.  You could use glitter, also.  I thought it was easier to tape and glue the bat down first, then add the black HoneyPOP. To shape the HoneyPOP, trace the side of the bat from just the head to the tail. The HoneyPop is only about 1/2″ deep. Trim off the head the tail. I cut the whole bat and only put part on; it didn’t open right. So, I cut the honeycomb paper so that it reached only to right under the bat’s head, following the shape of the wings. Refer to the photos. Tape and glue them open at the ends only. Open it first and see if you want to trim it here and there. It is only attached at the wings and it is open over the body.

The Front: I put my lettering on the front last, taping the card shut with blue masking tape.  Whether you do it first, or last, use both Sticko Alpha Stickers, Large Serif Foam, Black, and American Crafts, Maggie Holmes, Carousel, 353 Piece Thickers Happy Mint Green Foam (gold) lettering to sparkle the front of the card. This is a big and bold, fun card that will delight everyone. 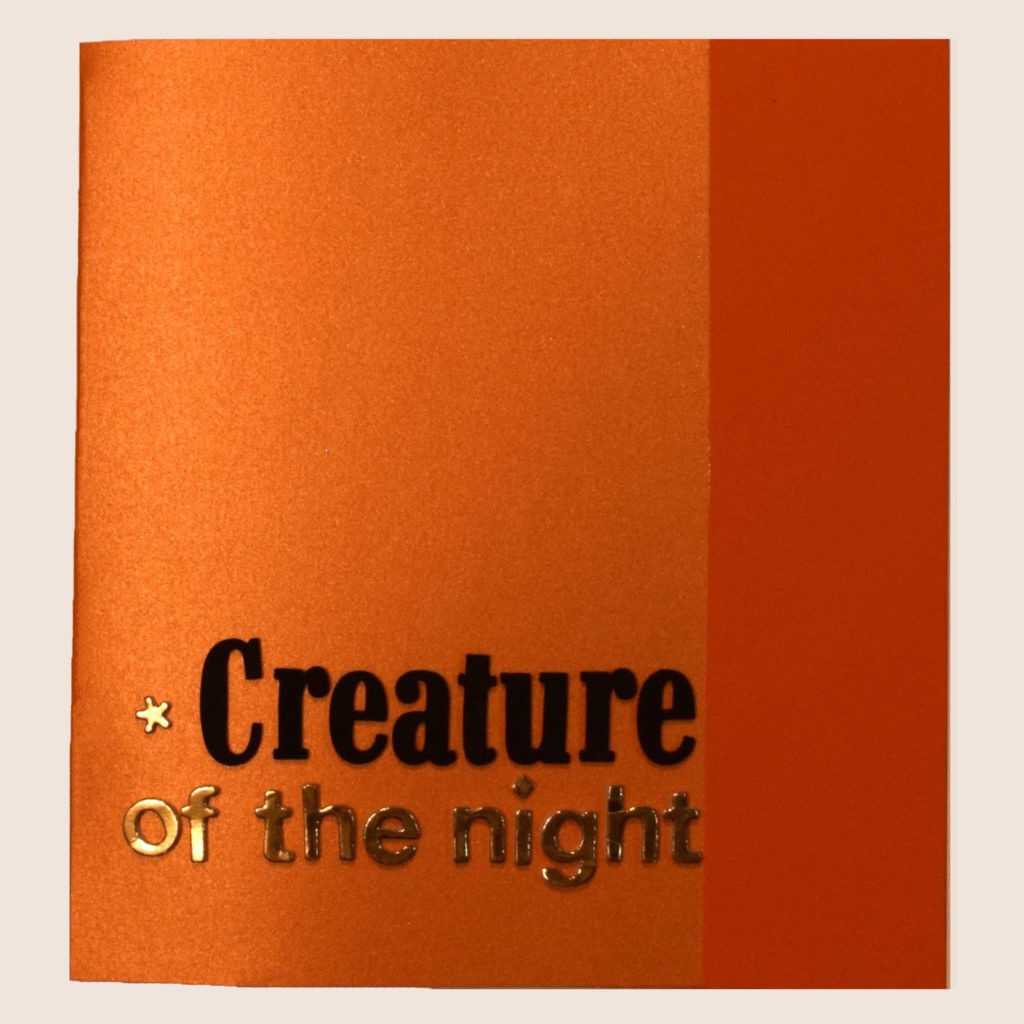 Papers used in this craft:

Other materials used in this craft: