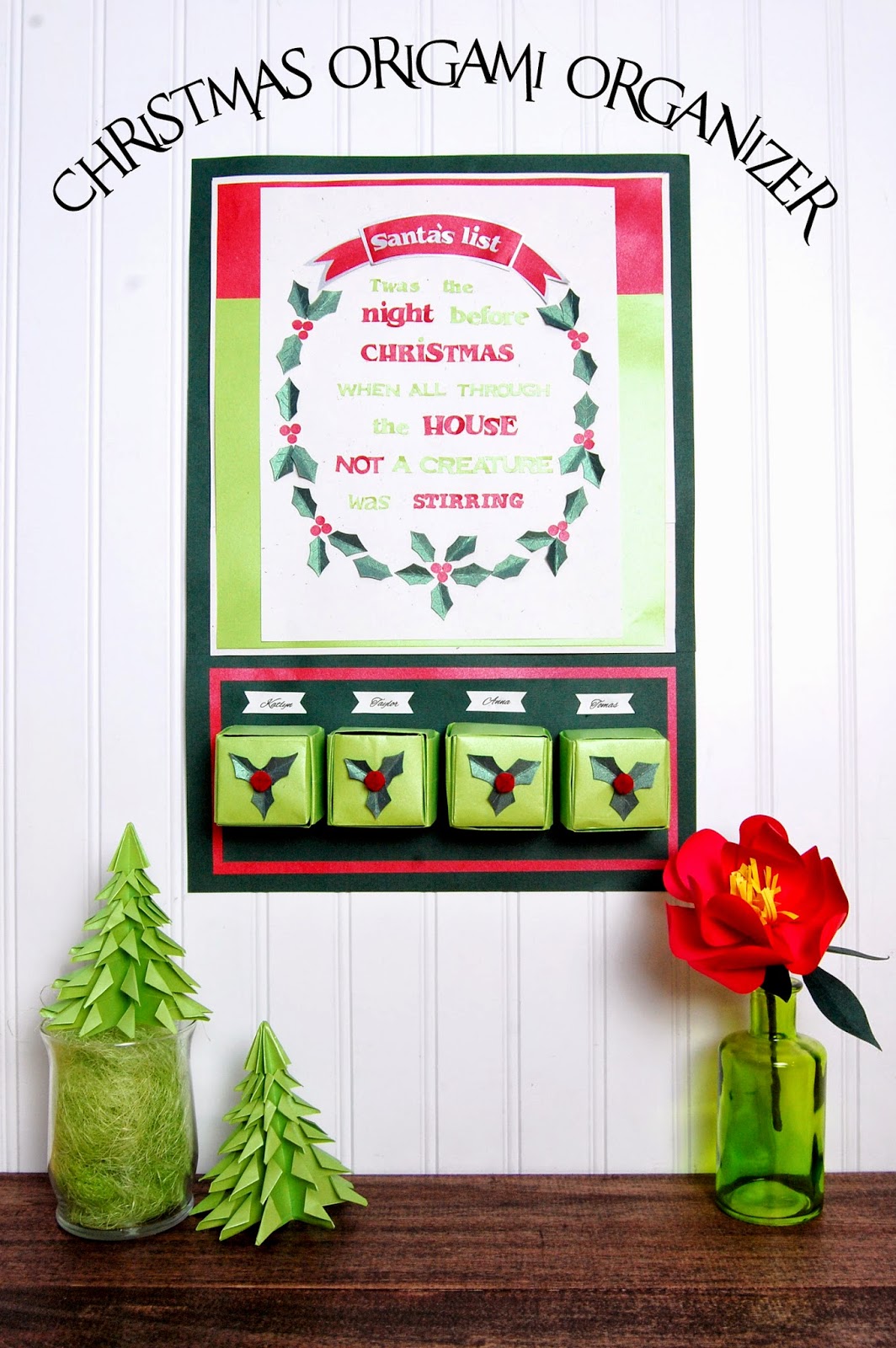 A pretty and fun festive project to do with kids is this Christmas origami organizer box for storing up your children’s Santa’s list for that special day. Be sure  to add some cookie or a glass of milk for hungry Santa too!

To start on this  origami box organizer I used:

Step by step – How to Make the Origami Boxes

To make the drawers,cut of  1/4 inch off from the folded rectangle paper (step 1) that you started with to create another box using steps above.Slide in the box into the larger box.

Using the holly template and cut  3 leaves from the green card stock for the holly leaves,

With a sharp scissor mark the center veils and side veins.Fold down the middle one.Stick to the box adding a bell for the knob!

Create the base for the Organizer:

Use 3 green Cardstock layers to form the base sticking with glue to form a thick base.

Layer a Jupiter Red Stip and one light Green paper for the top base showing the green base. Slide white paper underneath to create a thin border.

I used my Pazzles cutter to create the letters of the Poem the “The Night Before Christmas”. pdf file for wording.

Use the berry template and holly template to form a wreath around it.

For the bottom again layer a moss green paper to fit the 4 boxes.Slide a Jupiter Red paper to show as a this border.Stick all to the base.

Center the 4 boxes.Print your names in white paper and stick on back to label the boxes. After xmas use to store new year goals or store knick knacks.Happy Holidays!

Maria Noble is the Author of the book How to Make 100 Paper Flowers now on Amazon.For Maria Noble, making flowers is a lifelong passion that began as a child watching her mother and aunt run a floral business. Using innovative methods, they made beautiful flowers from fabric, paper, and other materials for weddings and other special events. Maria started her own business ten years ago, incorporating her inherited skills and exploring ideas of her own to create new, distinctive flowers. The business has flourished, and now her exquisite flowers are sought out by consumers and businesses nationwide, including leading event planners in New York and Los Angeles. Her flowers have been featured in various magazines and on popular websites. Find her online at stjudescreations and on her blog at www.stjudescreations.blogspot.com