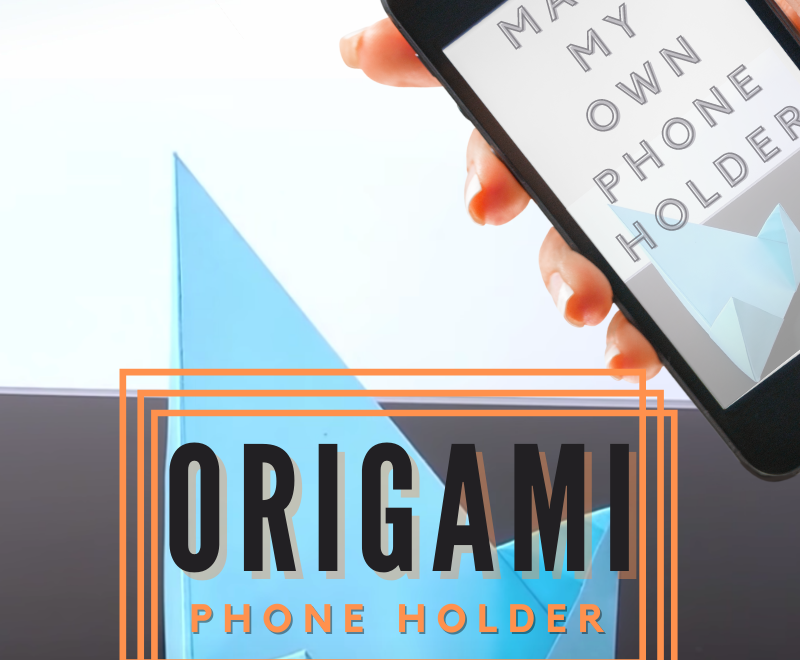 Do it yourself paper project, learn how to make an origami Phone Stand. If origami is your “happy place”, be sure to jump through to view other origami projects!

1. Fold the paper in half so that the shorter sides meet at the edges as cleanly as possible. Crease the paper flat into place then unfold it.

3. Repeat step two with the top corners, but after creasing do not unfold the flaps.

4. With the point facing away from you take the bottom corners and fold them up and inward to make little points similar to the big one. Now it should resemble an upside-down diamond.

5. Fold the bottom side upward over the line created by the base of the large point. This should form a triangle, and it should overlap perfectly. Crease firmly then unfold.

6. Unfold the two flaps that make the large point then refold the bottom upward as in step five. Turn the entire paper project over. Read the next part carefully.

7. There should be four crease marks; two long and two short. They will intersect to form X’s on both sides. Put a finger on the middle of either X then take the corresponding bottom corner and fold it inward from the side so that the crease that is created intersects the center of the X and aligns with the top corner. Repeat for the other side then unfold both.

8. Fold the bottom corners upward from the bottom so that the crease that is created intersects the same point from step seven, and meets the middle line at the bottom of the paper. Repeat for the other side then turn the entire paper project over once more.

9. The bottom half of the paper should resemble an elongated diamond pointing at you. Take the point of the diamond, and fold it upward from the bottom so that the diamond is folded in half. This should give you a flat edge closest to you. Crease firmly.

10. Fold the entire thing in half, but do not crease. Take the top left corner and fold it inward along the crease that is already there. Then the right corner will follow, and it should overlap the other and slide into place. Now you should have a rough pyramid.

11. Rotate the pyramid so that the point faces you. Place a thumb on the “floor” of the two intersecting sides, then flatten the smaller triangles on the sides. Be sure to hold the overlapping sides in place with your thumb. It should slightly resemble a dog’s head. Take the top of the “dog’s head” and fold it into and under the pyramid so that the bottom of the pyramid is flush on all three sides.

(Optional) For easy storage, you could flatten the protruding triangles against the body of the pyramid then fold the origami phone stand in half like a book. In this form, you could fit it inside of a book, or even a wallet!

Tutorial by: Easy Origami and Crafts, Created by Wellington F. Oliveira – checkout all his videos here

How to make an origami Phone Stand / Holder (version 4). In this video, I show you how to make a holder that will leave your smartphone both horizontally and …